To see more of my photography from this area, see this gallery.

Introduction
The Red Dot trail head can be found along Pierda Loop in White Rock. It is a well marked trail head in the middle of a housing development. The trail drops more than 800 ft into White Rock Canyon, through which the Rio Grande runs. Along the trail you can see petroglyphs, springs, a water fall, and the Rio Grande river. The trail connects with the Blue Dot trail which starts at the White Rock Overlook end. See the wikipedia entry for White Rock for more information.

Trail Options and What I Did
One can easily start at the Overlook end and hike down to the river and hook up with the Red Dot trail and hike out on the Pierda Loop end, or start on the Pierda Loop end and hike down the Red Dot trail, connect with the blue dot trail by the river, and return to the Overlook end. Unfortunately, either of these routes either require a shuttle car at one end or the other, or one must either walk through White Rock or retrace the same trail (ascent and descent) to return to your vehicle. The distance between the Red Dot trail head along Pierda Loop and the Blue Dot trail head at Overlook is approximately 6 miles or so through town (i.e., not along the trail). If you cannot drop a car at one end and have someone drop you off at the opposite trail head, one option is to place a bike at one end and a car at the other.

The ascent/descent on the Red Dot trail is much stepper, rockier, and more difficult to find than the Blue Dot trail, on which people on horseback are occasionally seen. First time hikers may wish to start on the Overlook end (Blue Dot) and hike to the falls from there, and return the same way. However, the views are a bit better from the Red Dot Trail end, and the trip to the falls shorter (but steeper).

The map below shows the route I took, along with some way points along the way which I will describe below. 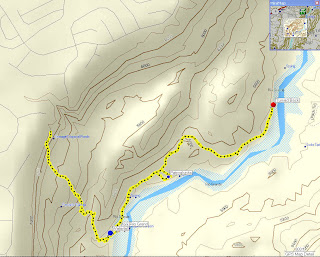 Description of Hike
The hike starts from Pierda Loop and quickly leads to a beautiful overlook of White Rock Canyon. 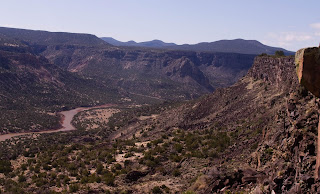 The Rio Grande River is some 890 ft below. As can be seen from the picture above, this is a desert climate. However, the hike actually has quite a bit of water. More so than is apparent when you set out. 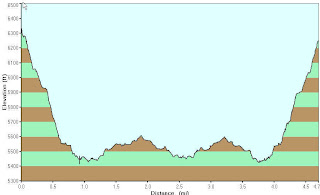 You will eventually drop 898 feet in about 0.9 miles, but the most rapid drop (and ascent on return) is in the first 0.62 miles, where you drop 770 feet. It is short, but steep (see profile above). The trail is difficult to follow in places, and is marked by red spray painted dots on the rocks along the way (hence the name of the trail).

As can be seen from the photograph, there is no shade along this portion of the trail. Bring plenty of water. This is a very hot hike in the summer. The time of year I went it was quite pleasant (in fact, it snowed about 2 inches that night!).

The following photographs were taken along the stretch of the hike prior to the falls. 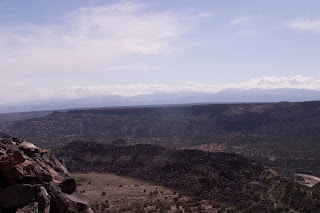 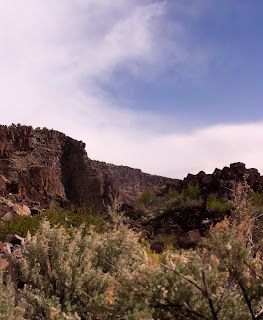 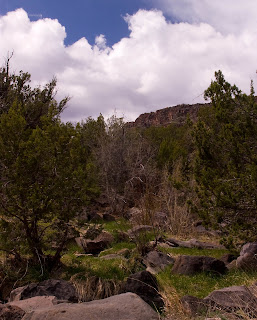 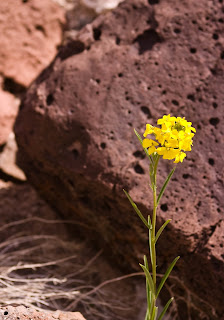 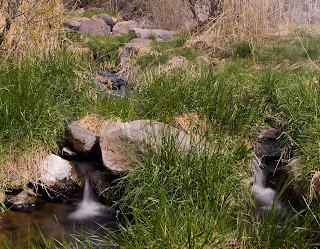 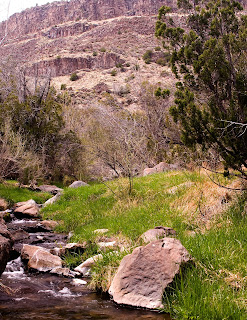 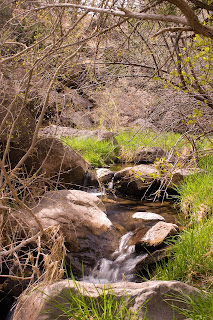 The Waterfall
The waterfall (GPS: N35 48.143 W106 11.722) is small, but beautiful and quite unexpected (if you ignore the sound of rushing water as you approach the falls from behind). The water falls approximately 7 feet and, as can be seen from the pictures below, it is a dual falls. 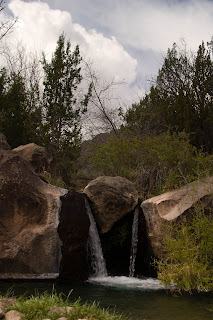 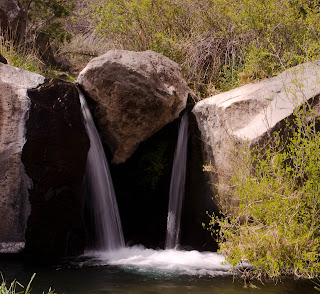 The Rio Grande lies a few hundred feet to the south east of this water fall.

The Rio Grande
There are several "trails" at the bottom of the canyon. The most obvious one will lead you to the river bank. The image below shows the route from the falls that I took to the Rio Grande. The labeled "fork" in the trail is actually a junction. You pass that junction to get to the river. You take the junction to transition to the blue dot trail. More on this below. 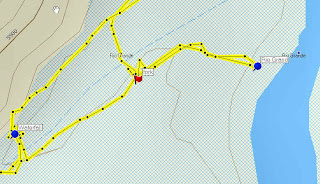 Once at the river bank, you can enjoy the view of the Rio Grande, a muddy river at this point in its journey. Do not attempt to drink water out of this river, even treated. You can drink the water from the springs along the creek on this trail with suitable treatment and filtering, but not from the Rio Grande itself. 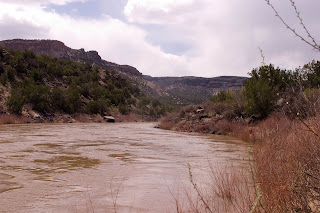 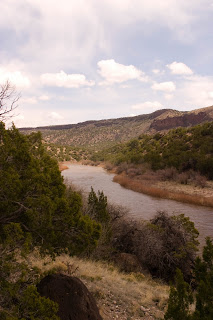 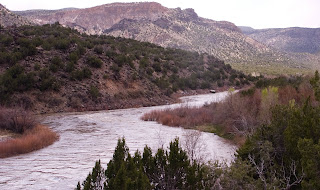 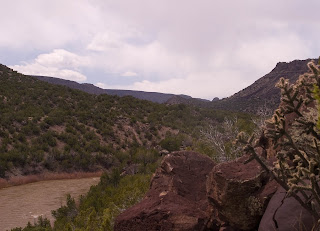 From here, I retraced my steps to the fork in the trail, at which time I took the fork and crossed the stream and continued along the now blue dot trail toward the east (in the map image above, it is up and then to the right). The upper loop on the trail leading back to the waterfall is the path I took on my return, after I turned around. As I said, there are several crisscrossing trails in this area.

The Petroglyphs
There are numerous petroglyphs along this trail, in particular on the walls of the canyon. Many miss these due to the need to carefully watch footing during the steep ascent or descent. There is one area in particular near the river that has multiple petroglphys that you can walk right up to. This is marked on the map above (GPS: N35 48.392 W106 11.408). Some pictures follow. If you look at the map image at the top of this blog entry, you will see a loop to these petroglyphs. This is not a marked trail and, in fact, is not a trail at all. It is just the path I took to get there. 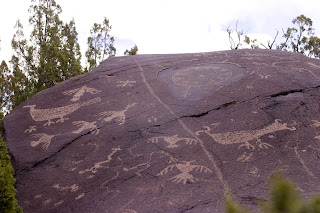 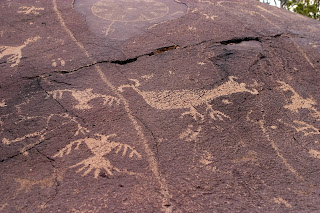 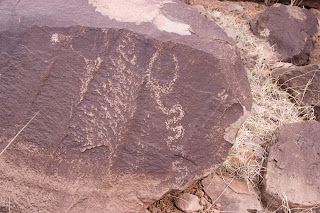 Unfortunately, some of these rocks now have combinations of people trying to make their own petroglyphs on these rocks as well as those of the genuine, ancient, variety. Careful study of the rocks will indicate which is which. I leave it to the viewer to discern this for themselves. These artifacts are not within the boundary of the nearby Bandelier National Monument, so do not have formal protection from the National Parks Service. Too bad, because some of these are quite interesting. I have only indicated with GPS coordinates those pictured above which are mingled with the graffiti. I leave it to the hiker to discover the many others along the trail on their own. 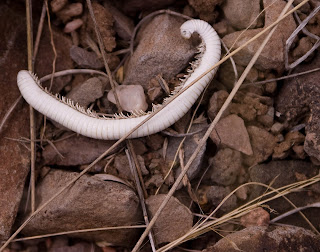 Rattle snakes are also common, but I spotted none on this hike.

Turn Around and Ascent
Below I repeated the map image of the entire hike that appeared at the top of this blog entry. The red marker indicates my turn around point.

The blue dot trail follows along the bottom of the canyon, coming near the Rio Grande in several places, and eventually ascends to the top of the canyon and emerges at Overlook Park in White Rock. Once I could see the Overlook area from the trail, I turned around and retraced my steps (with some other loops taken, such as the one near the falls).

Round trip for this hike was about 5 miles.
Posted by Stephen R. Lee at 4:15 PM

Very informative, thanks. I came to White Rock earlier this year. One of the first things I did was hike the Red Dot. Quite challenging for a sea level dweller!

Glad you liked it!

I tried the green dot, almost made it to the river was really tried so I turned back but I love your article, thank you, I am 63 doing Chemo, I was afraid of not having the energy to get back up

I'm glad you liked the hike! Best of luck with your chemo. Don't be afraid to give it another go when you're stronger!