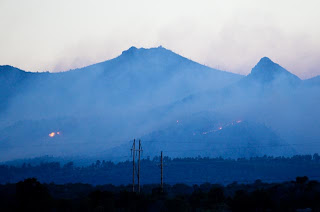 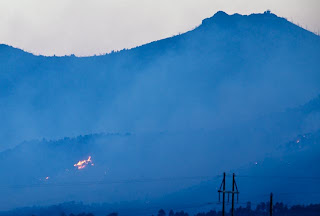 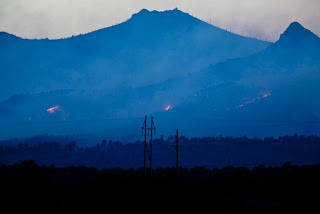 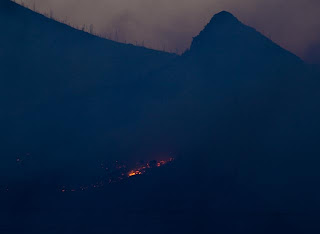 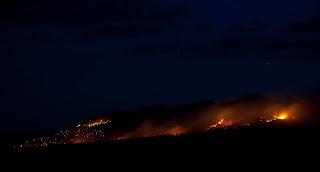 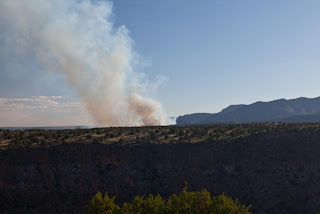 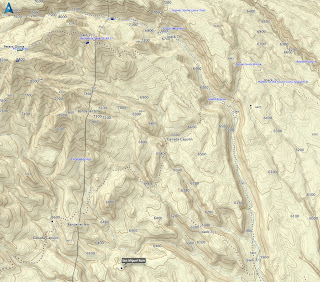 For those interested, follow the links above to keep up with the latest. It is something like 13 miles from the Los Alamos townsite, about 8 miles from the White Rock townsite, and has eyes on. The ranger I talked with said they were happy where lightning stuck, because the area it is burning needs it.
Posted by Stephen R. Lee at 7:18 PM No comments:

Senators Tom Udall and Jeff Bingaman have written to the National Parks Service Director, asking the agency to access the potential to include the Valles Grande National Preserve in the National Parks System. The park has been managed by a self-governing corporation directed by an independent board of directors. Stories can be found here (Santa Fe New Mexican) and here (vallescaldera.com, which has a collection of stories).

To me, the current management model was one borne of political compromise to appease a broad set of interest groups all with a different personal interest in the Valles. The charter has been nearly impossible, as all of these (at times) mutually-exclusive interests seek satisfaction: hunting, grazing, recreation, science, preservation. As is usually the case with politically compromised solutions involving committees of people trying to manage something this complex, little progress is made after the initial conditions are agreed upon. In my opinion, that is what has happened here.

I am pleased that the Valles Caldera is as open as it is now, and I am not suggesting that individuals involved in its management are doing a poor job. Under the circumstances, it is probably the best they can do given the compromises and competing interests. I am not in a position to judge them or their actions. However, I do know a poor use of public land when I see one, and this is an obvious example. The potential for this area is incredible, rivaling that of some of our most beautiful National Parks -- many of which I have visited personally and know quite well.

So, I am pleased that our two Senators are asking for an examination of this issue. I am under no allusions that my complaints about how this is currently managed are going to magically disappear if the NPS is managing it because I suspect that any change in management will occur with the same political compromise baggage. However, I hope that the experience of NPS managing lands combined with public pressure for access will build a better management model over time.

In my opinion, the focus of NPS management should be all about access. Access, access, access. Do away with reservation-only hiking! Or at least greatly minimize it to what it is now. Perhaps it is needed during hunting season or something, I don't know, but make this a convienient place visit. Not a chore. Provide significantly opened up access to the public in much the same way other national parks are managed, including Bandelier which is directly physically connected. I would also like to see work connecting trails from Los Alamos county to this area, all of which are blocked now. There is no real work to do here in many cases other than remove the man made barriers that block these connections at present. I want to be able to drive up and hike. Not just the few trails around the perimeter, but those in the back country as well. There is no reason I should not be able to simply show up and hike. Roads already exist, so mountain biking should also be allowed as it is in some other national parks in the country with similar roads already in place. At a minimum I should be able to show up and hike up those roads to reach the other trailheads rather than be forced to ride in a van and schedule my hike accordingly.

I would also like to see this be a resource with information on the NPS website, just like other national parks, with the same quality, consistency, and information. It would help draw people to the area and help the local economy. If the trails were connected from some of the excellent hiking trails in Los Alamos county, it would be a great way to advertise the area with this as a real connection, not an invented one that requires a 25 minute drive and pre-scheduling activities.

I do worry that NPS staffing limitations and whatever initial processes they would have to go through (e.g. NEPA) before they could take it over would actually restrict access more than it is now, at least initially. So the transition would have to be manged such that this does not happen, and also such that there is a tangible opening up of access right away in this transition to build public trust and give the NPS an initial win. The focused intent here should be on public access under the NPS umbrella of resource protection. I have never liked the current management model and have stayed away as a result, with the exception of the trails near the outer boundaries where I can just show up and hike on my schedule. I know many other people with this same view. I hope this study is a sign that this will all change in a relatively short period of time, and not get caught in the political compromise and special interest cycles. That would only serve to provide the same type of access we have now under a different management umbrella.

I plan to write these two Senators about this issue, and support the management change with the caveat of focusing on more public access. If you are moved to do the same, you can email Senator Bingaman and Senator Udall and Representative Ben Lujan.
Posted by Stephen R. Lee at 9:07 AM 3 comments: