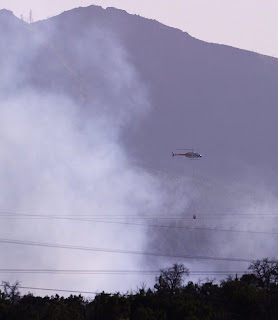 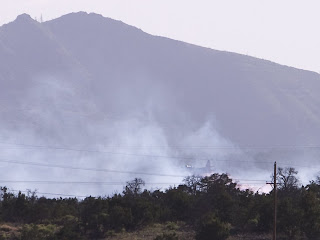 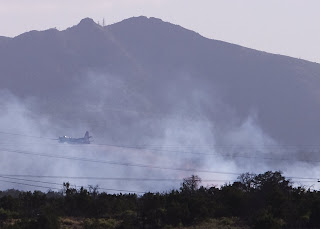 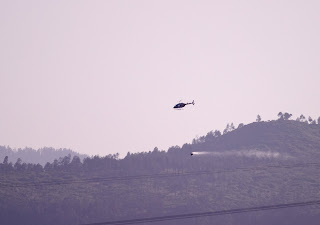 The fire seems to have quieted down now, thanks to the quick action of the firemen on the ground and in the air.
Posted by Stephen R. Lee at 7:12 PM

any idea how it was started?
don't they have fire base there from the cerro fire?

I don't know how it started. The laboratory sent an email around late today simply stating a fire was burning on LANL property. I found out about it from an email that went out much earlier from the homeowners association where I live.

It was almost certainly human caused since there were no thunderstorms in this area today.

There is a base for wildfire operations on the northwest side of State Road 4, about 2 miles west of the Bandelier entrance. It is possible that this is where the helicopter came from, but they don't have one stationed there year 'round typically, but perhaps they have one stationed there during our hot and windy season (i.e, now). However, there are a lot of very good firefighters here and the call for the slurry bomber, a number of which are stationed in Albuquerque, are only minutes away.

If I hear more about this, I'll post it here (or anyone can if someone else hears more). Thankfully, this seems to have been handled well. My hat is off to those that hopped on this. Given the winds today, it could have been much worse.

Well, no sooner than I post a response and I see an update. An email to all LANL employees indicates the fire is contained, the cause is unknown but under investigation. Over 40 firefighters responded, from Los Alamos County, NPS, NFS, and the Santa Clara Pueblo.

Incidentally, the helicopter was indeed from the area I mentioned above (TA-49). It is stationed there during fire season evidently. Air activities will resume tomorrow if needed. Fire is contained at 10 acres.

Are you still running a weather site? I was looking for it yesterday to see wind speeds in WR and was hoping you would have a link from this blog.
Great photos by the way. Makes me want to go visit all the local terrain....especially with gas prices.

I do have a weather site. I should indeed post a link from this blog (duh).

In my opinion, the best place to go to look at my weather data is wunderground.com. I post data there and it has a nice interface to see past data (www.wunderground.com/weatherstation/WXDailyHistory.asp?ID=KNMLOSAL1). You will also get to this if you go to wunderground.com and look for Los Alamos, NM. There are links to personal weather stations on that page and mine is one of them.

You can also get to the webpage produced by the weather software I run directly at www.srlee.net/weatherdata/whiterock.htm.

Unfortunately, my weather instruments are getting a little crufty and are in need of calibration in some cases, or replacement in others. Still, it is not too bad.

blogspot truncated one of the weather links, but that's OK. I put them all in the links section of my blog so you can just click them. In addition to my own station, I added another one in White Rock also posted to wunderground.

Thanks for the photos and the info!
It's nice to see more bloggers around this parts.

"An article in the Journal North blames the small fire at TA-39 on a malfunction during an equipment test. The test was done after the National Weather Service posted a red-flag warning for much of the state because of high winds and low humidity.

Roark said no one expected the equipment to malfunction. Brilliant comment similar to some of the ones made by various NPS personnel after starting the Cerro Grande fire.

How many pounds of paperwork had to be completed prior to the test? Just goes to show that paper don't make you safe. What was the cost to extinguish the fire? The LANL manager who approved the test should have to pay for putting it out."