Signs of a Monsoon 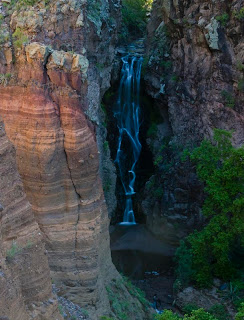 Today was short hike to the Upper and Lower Falls in Bandelier National Monument (BNM), this time with some of the Girl Scouts from my daughter's troop. The falls trail is a nice, short, easy hike, about 5 miles round trip and a mere 615 ft elevation loss/gain. If you go all the way to the Rio Grande, it is closer to 700 ft elevation loss/gain. The trail route and profile are shown below. 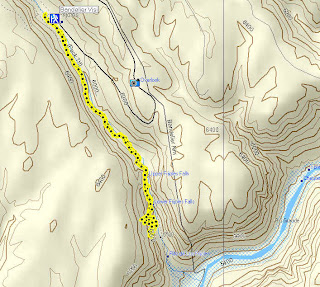 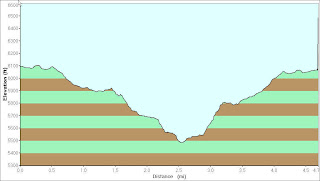 As can be seen from the trail route above, we went to a point past the Lower Falls and turned around and went back. One can continue on to the Rio Grande, but the last time I did this a couple of years ago, the trail was hard to follow past the fence that is the boundary of BNM, and there was not much to see anyway.

The hike starts from the back country parking area just past the visitor center (drive over the small stone bridge over the Rio Frijoles and turn left). As we embarked on this hike, we wound up being intermingled with a large group of volunteers (or paid staff, not sure which) with tools to work on the trail. I soon discovered why. The trail more or less parallels the Rio Frijoles, from an elevated perspective. As I walked along, I could see clear signs of a fairly significant flood. This is a narrow canyon in many places, and with the monsoonal flow of moisture into New Mexico at this time of year, we get significant thunderstorms often dropping rain measured in inches in a few minutes. That creates flash floods and, in a canyon like this, a very powerful wall of water. We soon came to the first crossing of the Rio Frijoles, which should have been on a bridge. 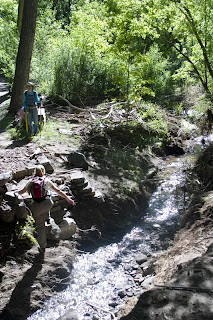 However, as you can see from the above, the bridge was missing. My wife is crossing the Rio Frijoles after climbing down the steep embankment. You can see the rocks that supported the bridge on the other side. It turns out that on Monday, 7/28/2008, just such a cloud burst and took out this bridge and damaged the trail in several places. A little further along, more damage was evident. 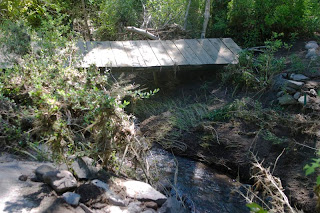 Here, you can see the bridge intact, but torn away from its anchor crossing the Rio Frijoles. If you look carefully, you can see other signs of the torrent of water that went through here Monday. This bridge was still usable, so we crossed using it.

The Falls hike is a lovely hike, remaining near the Rio Frijoles and crossing it several times, passing through an open meadow, and then crossing a narrow pass right above the Upper Falls (which is pictured at the top of this blog entry). Below is the view when you top out in the narrow pass, right above the falls to the left. You cannot see the falls from this vantage point -- but you can hear them. You can also see the Rio Grande in the distance. 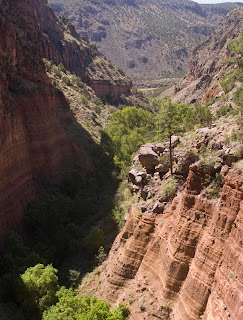 The falls themselves are pretty, particularly with good flow over them (like during spring ruin off, but I've never made it out here during that time). In the past when I have been here, the falls have been a trickle (and the lower falls invisible). Thanks to the rains, that was not the case this time. 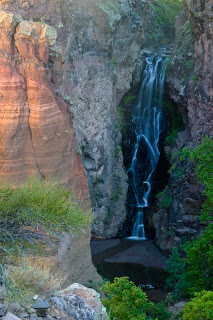 A little further along, the Lower Falls comes into view. The trail is along a canyon wall, and is made up of loose shale. Hike carefully here as it is easy to loose your footing and take a tumble. You also need to watch for poison ivy and rattle snakes along this trail (more on both later). 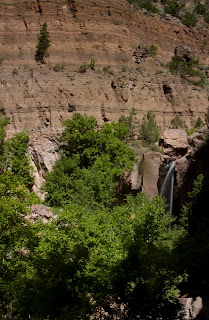 I could not help but wonder what these falls looked like during the flash flood that took out the bridges. But I am glad I was not there to witness it.

We continued down the trail a little further, with the Girl Scouts, to a shaded area in a significantly washed out part of the trail and took a brief rest and turned around to head back. Poison ivy is quite common along this trail, and it can grow to impressive sizes here (and in the upper reaches of Frijoles as well). I took this photograph of poison ivy along this trail. 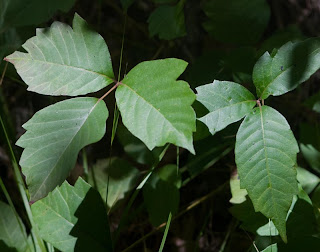 On the way back, we saw a young skink on the rocks along the trail. I've never seen one of these before. 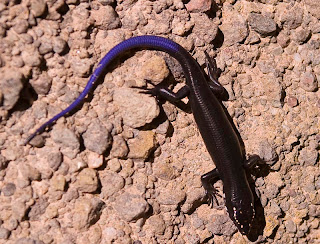 After we climbed back past both lower and upper falls, a party descending into the canyon warned us of a rattle snake curled up in the rocks close to the trail. Sure enough, we saw him. 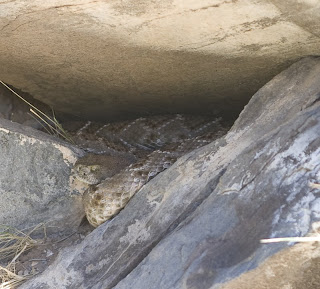 He was quite content curled up in the shade. He did not even rattle. Perhaps he had recently eaten and was resting digesting his food.

The photograph below was taken of us ascending out of the canyon near Upper Falls, not too far beyond where we saw the snake. 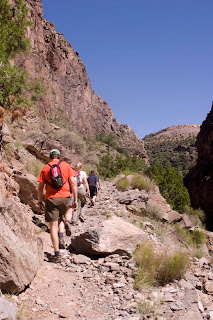 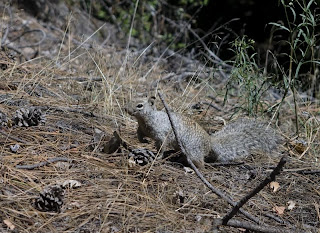 There are also interesting rock formations along this trail in several places. Below is an example, taken looking north right at the saddle above Upper falls. 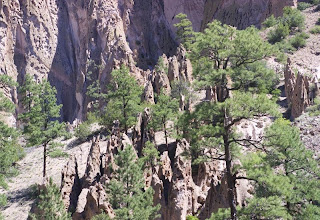 This is a fun, easy, hike and highly recommended. It has large sections that are exposed, and can be quite hot and miserable in the summer so take plenty of water. This is also a very popular hike, so the trail can be crowded. Today it was crowded with hard working folks working to repair the trail and keep it in good shape. So thanks to those folks who work hard to ensure the trail is there for all to enjoy. To see more images from this hike, see my companion photography gallery.
Posted by Stephen R. Lee at 9:52 PM

Cool photo of the blue-tailed skink, Stephen! Thanks for the tour. This year has seen a bumper crop of poison ivy, hasn't it? Keep on truckin'!

Thanks, Jimbo! The poison ivy is indeed impressive. Particularly toward the Upper Crossing of the Frijoles...

The Falls Trail is one of my favorite hikes. I used to run it back in the day in HS when I worked at Bandelier...I must do it again, it's been so long! The first time I saw a juvenille Great Plains Skink it freaked me out too. New Mexico herpetofauna is one of my great interests ;) I'm glad I wasn't there to see the rattle snake...I've only ever seen one in all my years of hiking here in NM...

A skink I'd never seen before, but I've dealt with plenty of rattle snakes in my time. I grew up in Las Cruces and we used to have a house next to the Rio Grande in Truth or Consequences and rattle snakes were a common fact of life.