Tsankawi: The "Other" Bandelier 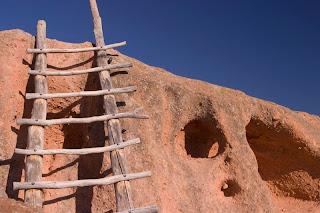 On Friday I went for the short loop hike in Tsankawi (pronounced "San-Ka-Wee), which is part of Bandelier National Monument. I mostly did this because there was a prescribed burn going on in Frijoles Canyon, and I was not precisely sure which trails were open. But I knew Tsankawi was, and I had not been there in at least 18 years.

I call Tsankawi the "other" Bandelier because it is a separate unit from the main part of the park, which is some 12 miles from the visitor center in the bottom of Frijoles Canyon. It is located near the busy intersection of State Road 4 and East Jemez Road (East Jemez Road is one of the four routes into Los Alamos County). There are no services at this site, which is essentially just a trail head. There are restrooms there (port-a-potties) and a fee station to purchase an entrance fee to Bandelier that you need to post on your dash (same entry fee will get you into the main Bandelier unit as well; you can also use your national parks pass here). Cars parked there without a displayed pass or receipt will be ticketed as the NPS does patrol this area. On the left side of the trail right after you enter here, there is also a self-guided trail map that is worth picking up before you start out (be sure to drop 0.50 into the slot if you take a trail map/guide).

Tsankawi is an interesting short loop trail that passes through the unexcavated Tsankawi Pueblo ruins, and also passes by numerous petroglyphs and cavates. I have mentioned cavates in this blog before, of course, but in brief, a cavate is a combination of the words "cave" (which is a natural hollow) and "excavate." Therefore, a cavate is a small area carved out of the side of the tuff-encrusted cliffs in this part of the country by ancient inhabitants to protect them from the harsh (summer or winter) elements on the tops of the mesas. This is not a particularly quiet trail until you get up onto the mesa, and then drop back behind the mesa away from the nearby roadways. This can be a popular trail since it is right next to the main road, is short and easy...but it is also true that it is not that well known since it is so far removed from the visitors center.

The image below shows the map of the trail that I walked. 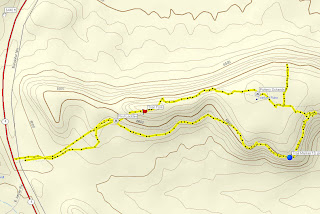 The total distance was 1.9 miles with a tiny elevation gain of 173 ft (trail head starts at 6531 ft elevation).

After a short walk, you encounter the first ladder (GPS: N35 51.677 W106 13.243, pictured at the top of this blog entry). There are three ladders like this on this trail. If you do the loop, one of them is optional as you will see in a moment. On the way to this ladder, I noted several signs of fall. 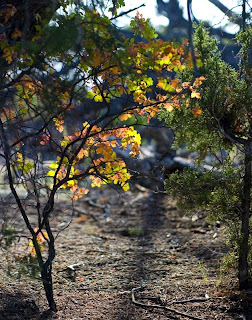 This first ladder brings up you to the next level of the mesa, but not to the top yet. A short distance beyond the ladder you encounter a fork in the trail (GPS: N35 51.693 W106 13.176). Bear left here and hike up the well worn path in the tuff. 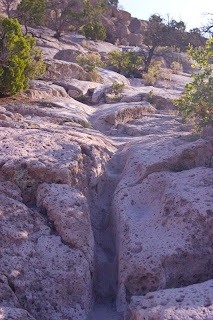 Many areas of the trial along this loop look like this. This is at "trail marker 4" if you use the trail guide picked up at the trail head, but marker 4 is missing on the trail itself.

Once the short climb levels off, you encounter your first petroglyph on the left. It is a well-worn one, a bit difficult to see. In the image below, I adjusted light levels to make it easier to discern. 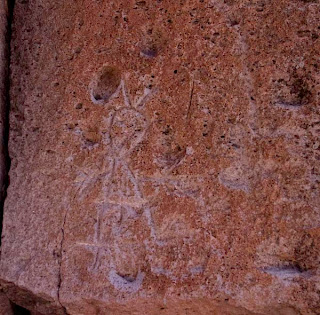 This is at "trail marker 6" in the trail guide and, right around the corner from this point, you encounter another fork in the trail. 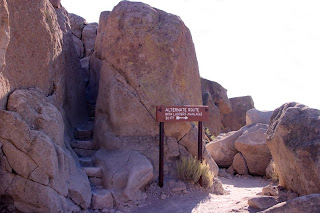 Here you can use a ladder to get the top of the mesa or go up the trail carved into the tuff on the left. Of course I chose the tuff route. Either way, this is the last climb on this trail and it is quite short.

At the top of the mesa, the view is expansive. Pictured below is what is referred to as "The Y" around here, because the roadway coming up from the valley to the east splits into two here, one going up main hill road into the Los Alamos Townsite, and one going to the south into White Rock (also in Los Alamos County). 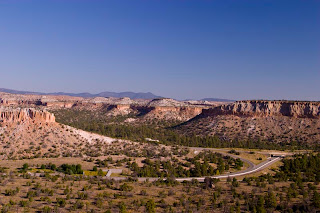 This entire area is well known for its rock formations and mesas, which are quite unique. 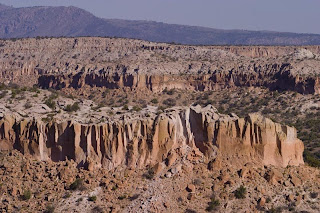 Below is a view toward the west, directly toward Los Alamos National Laboratory and the Los Alamos townsite. The Jemez Mountains serve as the backdrop. 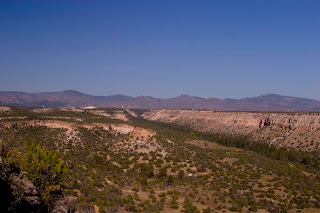 In the image below, one can see Boundary Peak in Bandelier in the distance (see my Cerro Grande and Stone Lions blog entries for more on Boundary Peak). 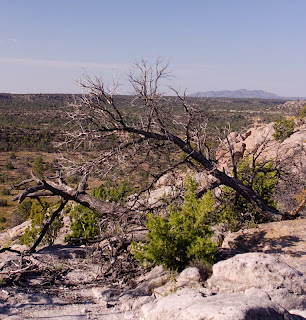 As you continue on the mesa tops, excellent views abound. To the north west of the mesa, one can see "Duchess Castle." I don't know why it has this name. 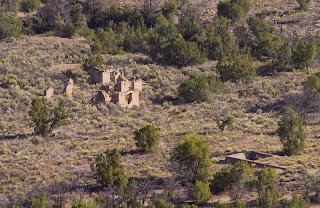 This is the remains of a building constructed in 1918 by Madame Vera von Blumenthal and Rose Dungan, which was a home and pottery-making school. There are no trails down to this area.

Shortly beyond this, you arrive at the ruins of Tsankawi. 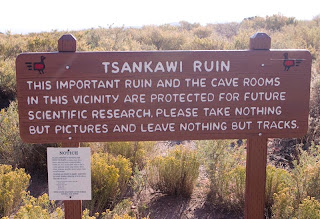 This is an unexcavated ruin. If you look around, you will see pottery shards on the ground. In some cases, someone piled them on rocks by the trail so you can see them easily. 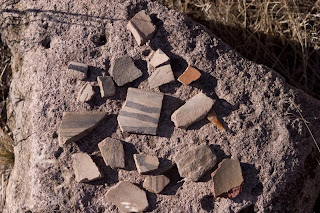 Here are some I found just looking around the area, probably unearthed by monsoon rains. If you see any laying around, just leave them where they are. 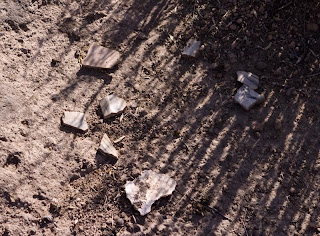 Here is another pile that someone made near the trail. 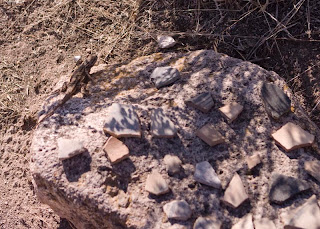 If you look closely, you will notice something else on the rocks with the pottery. 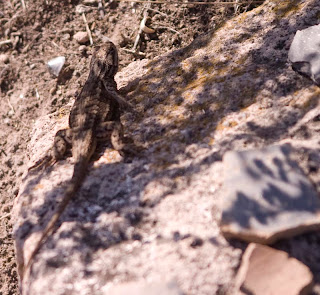 As I said, Tsankawi is a completely unexcavated ruin and, as such, looks essentially like a pile of rocks covered with dirt. 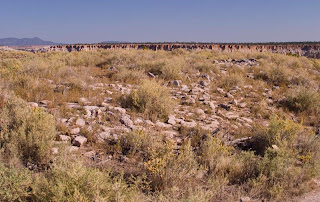 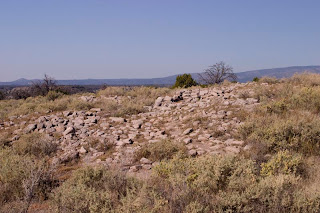 This is a very dry area and, as I noted in my Stone Lions blog entry, it must have been difficult to dry farm and survive here. Remarkably, the entire ruin contains 275 ground floors and was one or two stories high. The trail passes over and directly through this ruin and, just before you encounter the other side of the mesa (east side, where you climb down a ladder), you pass by a couple of flat buried stones. 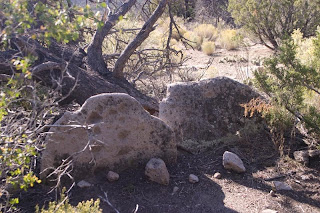 This is a "trail marker 14," and is believed to be part of the remains of an old reservoir. Because it was so dry here, any moisture was a blessing. It is believed that this area served as a small reservoir that would trap rainwater and snow melt off of the roofs of the Tsankawi village immediately uphill to the west.

Shortly after this area is the descent off of the east side of the mesa. Once down the ladder, there are a large number of cavates in the area. 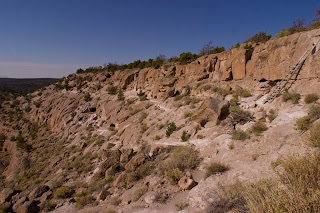 This image shows the ladder on the right used to climb down off of the mesa top. The trail is also visible heading off to the south.

I went inside a cavate just to the north east of the ladder. 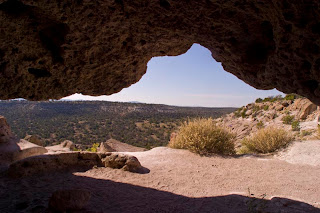 Right next to it were some carvings in the side of the tuff cliff, probably part of a roof or other structure for storage. 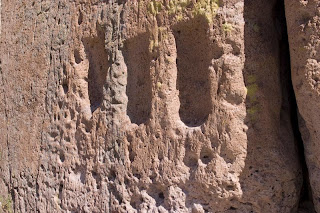 Many other cavates are visible from here, as are the ancient paths to reach them. 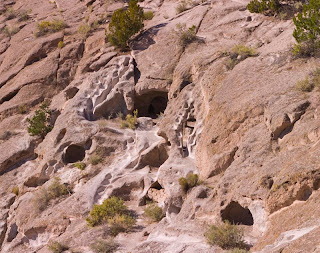 These are below the cavate I was standing in, and I did not climb down to them as they are not on the trail. However, these are. 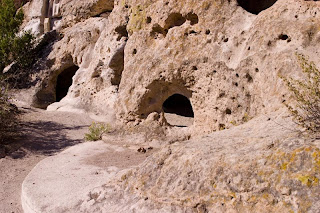 For more images from this hike, refer to my photography gallery for this hike. 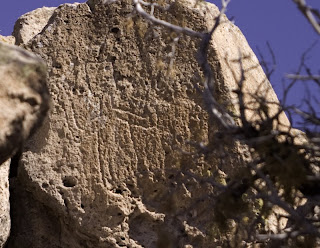 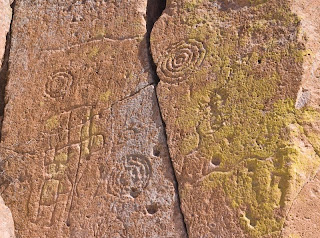 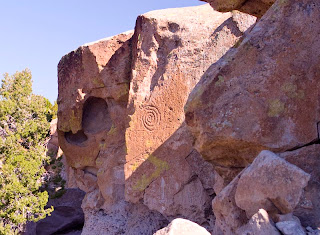 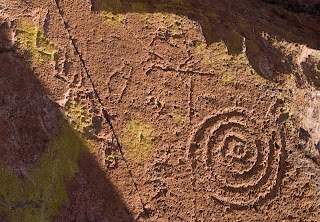 Finally, the only wildlife I saw on this trail on this day were lizards (and ground squirrels/chipmunks). The one pictured above, and the one below. 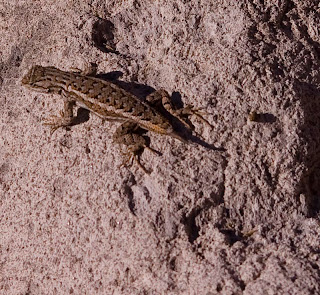 This fellow is growing back his tail which was undoubtedly lost when a bird of prey or some other predator tried to grab him for a quick snack by his tail.

This is a very easy hike with some very interesting geologic and archeological features. A nice area in my backyard.
Posted by Stephen R. Lee at 8:45 PM

Thanks for the detailed walkthru. I had been to Bandelier before but not to this site. I was debating whether I should stop by this year and your walkthrough with pics has made the decision for me. By any chance do you know about the petroglyphs at White Rock? I understand there are two trails there but I have not found much info on them.

Yes, I do. See posts from April last year, specifically, the red and blue dot trails in White Rock.

This is just the information about this community I have been searching for..I am not an avid hiker, but I love a great walk with lots to explore. Oh, an the reason why it is called "Dutchess Castle" is because Madame Vera Von Blumenthal was actually a Dutchess.

I am looking forward to spending a day enjoying these amazing places.

Correction: The women who lived at Duchess Castle were Madam Verra von Blumenthal and Rose Dougan.